Hammered Trivia is looking for the best trivia team in the Triangle!

If so, your team could win big!

We keep track of your score over 10 weeks (June 5th - August 12th).
We drop the lowest score - add up the rest - to give your team a final score and see how you stack up against the other teams at your location.

On Saturday, August 27th, the best teams from each location will be invited to the first ever Triangle Trivia Tournament where the questions will be more difficult, the competition will be the tough, and the prizes are huge!

The top teams' registrations are sponsored by the participating locations.

If you have questions, please feel free to email thor@hammeredtrivia.com or speak to your Hammered Trivia host.

Is your team participating and looking for your scores? 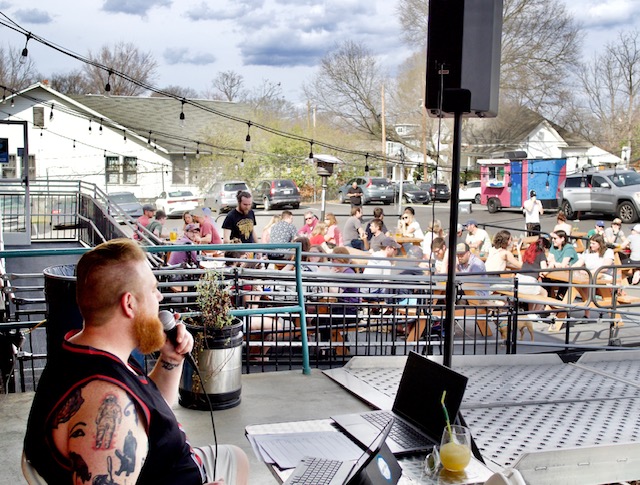 RALEIGH, NC / May 17, 2022 – Friends have long-enjoyed getting together for trivia night at their favorite neighborhood watering holes. Week to week, some teams are consistently top contenders. Those interested in putting their collective knowledge to the test against the best in The Triangle now have their chance in a first-of-its-kind, area-wide competition.

Winners of the Hammered Trivia Triangle Tournament will walk away with ultimate bragging rights – not to mention the $1,000 top prize.

Eighteen businesses host Hammered Trivia on a weekly basis. For ten weeks starting on June 5th, hosts at 13 participating locations in the triangle will keep a running score of competing teams. The three teams that accumulate the most points from each location will punch their tickets to the tournament finale. Qualifying round venues are:

After a summer of spirited competition, the qualifying teams will converge on Saturday, August 27th at Durty Bull Brewing in Durham to crown a champion. First place winners in the inaugural Hammered Trivia Triangle Tournament will take home $1,000. Second place scores $500 and third place wins $250.

The tournament comes as Hammered Trivia marks its 10th anniversary of hosting events for friends to measure their mastery of facts and figures. Founded by Thor Dollar, a 20-year veteran of the entertainment industry, Hammered Trivia is a three-time INDY Week Best of the Triangle award winner and two-time WRAL Out and About top vote-getter.

Hammered Trivia's small army of hosts will preside over the qualifying rounds, setting the stage for the culmination of the tournament in late August.

For more information about this first-of-its-kind event, please reach out to Thor Dollar at 919-889-0042 or thor@hammeredtrivia.com.